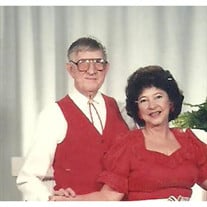 Zeffree Jeffries Mahone, 87, of War went to her heavenly homecoming on Monday, September 18, 2017 at her home where she lived with her daughter, Chrissy Stepp. Born January 25, 1930 in War she was the daughter of the late Nick and Frances Jeffries. She graduated from Big Creek High School in 1948, and then married Grover S. Mahone. She was the owner of Zeffree’s Beauty Shop in War for many years before moving the shop to her home, where she eventually retired. She was a member of the War Women’s Club, and the Tug Twirlers Square Dance Club in Welch. She attended and was a life time member of Calvary Baptist Church in War. She enjoyed painting, drawing and playing cards. She loved to dance and sing. When she became ill she said she wanted everyone to be happy when she goes, because she was going to a “Better Place”. In addition to her parents she was preceded in death by her husband, Grover S. Mahone; a brother Regis Jeffries; three sister, Tenia Pennington, Frances “Panky” Jeffries Boardman, and Christine J. “Crippy” Brewster. Those left to cherish her memory are her two children, Grover C. Mahone and Marsha, and Christine “Chrissy” Mahone Stepp of War; five grandchildren, Shirley, Kristen, Alivia, Ayla and Hunter; two great grandsons, Brayden and Kason; three great granddaughters Leah, Kaylee and Adalynn; several nieces and nephews of Florida; and special friends, Kevin Fuller, Duke Hardy, Tommy Perkins, Jean Wallace, Debbie King, Pauline Luke and Helen Shrader. Mrs. Mahone’s wish was to be cremated, and the family has honored that wish. A memorial service to honor her life will be held Friday, September 22 at 7 p.m. in the Calvary Baptist Church in War with the Rev. Gary Pennington officiating. Friends may visit with the family one hour prior to the service. The Douglas Mortuary is serving the family.

Zeffree Jeffries Mahone, 87, of War went to her heavenly homecoming on Monday, September 18, 2017 at her home where she lived with her daughter, Chrissy Stepp. Born January 25, 1930 in War she was the daughter of the late Nick and... View Obituary & Service Information

The family of ZEFFREE JEFFRIES MAHONE created this Life Tributes page to make it easy to share your memories.

Zeffree Jeffries Mahone, 87, of War went to her heavenly homecoming...

Send flowers to the MAHONE family.