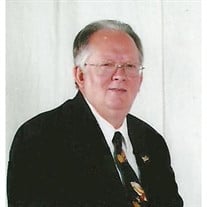 Stephen R. Walker, Sr., 64, of Twin Branch departed this life and went to be with the Lord on Friday, August 3, 2018 at sunset in Charleston Area Medical Center/ surrounded by his family. Born November 1, 1953 in Welch, he was the son of Janet Walker of Twin Branch, and the late Marvin Walker. He was of the Pentecostal faith and served as Pastor of the Twin Branch Pentecostal Trinity Assembly Church for 34 years. He was the principal of Twin Branch Pentecostal Christian Academy for 31 years. He served in the U.S. Army from 1971 through 1974. He was a coal miner and a UMWA representative for U.S. Steel number 50 mines at Pinnacle, WV for 10 years. He was preceded in death by his father, Marvin Walker; nephew, Justin D. Peake; and grandparents, Vanbeuran and Pearl Walker and Bernard and Mildred Mills. Those left to cherish his memory are his wife of almost 46 years, Regina Prevento Walker; sons, Stephen R. Walker, Jr. and wife Regina of Capels, and Andrew M. Walker and wife Robin of Marytown; daughter, Patricia K. Adkins and husband Harley of Pineville; 8 grandchildren, Tyler, Caleb, Emilee, Megan, Morgan, Maddox, Haley and Austin; a sister, Katherine Peake and husband Ronald (Rocky) Peake; five brothers, Marvin L. Walker and wife Sandy of Welch, Johnny Walker and wife Linda of Twin Branch, Terry Walker of Twin Branch, sister-in-law Marlene Walker of Davy, Jackie Walker and wife Letisha (Tish) of Twin Branch, Jerry Walker and wife Alice (Ninky) of Davy; and a host of family and friends. Most of his life was dedicated to preaching God’s word and serving those in his church and community, and all those he met along the way. “I have fought the good fight, I have finished the race, I have kept the faith. Henceforth there is laid up for me the crown of righteousness which the Lord, the righteous judge, will award to me on that day and not only to me but also to all who have loved his appearing.” Funeral service will be conducted on Thursday, Aug. 9, at 12:30 p.m. at the Twin Branch Pentecostal Trinity Assembly Church with the Revs. Melissa Craft and Gene Ball officiating. Burial will follow in Woodlawn Memorial Park Cemetery in Bluewell where military graveside rites will be conducted by VFW Post 1144 of Iaeger. Friends may call at the church Wednesday, Aug. 8, from 6-10 p.m. Serving as pallbearers will be brothers, nephews and friends. The Douglas Mortuary of Welch is serving the Walker family.

Stephen R. Walker, Sr., 64, of Twin Branch departed this life and went to be with the Lord on Friday, August 3, 2018 at sunset in Charleston Area Medical Center/ surrounded by his family. Born November 1, 1953 in Welch, he was the... View Obituary & Service Information

The family of STEPHEN R. WALKER, created this Life Tributes page to make it easy to share your memories.

Send flowers to the WALKER, family.