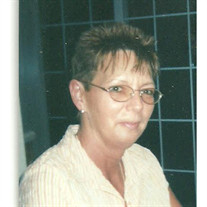 Patricia Jean Lane-Dillon, 58, of Lexington, NC, formerly of Gary, passed away Thursday, March 16, 2017 in Lexington. Born December 2, 1958 in McDowell County she was the daughter of the late James H. Rose and Kizzie Lester Rose. She was a graduate of Welch High School. She was a former receptionist with the Department of Health and Human Resources in Welch, and retired as a receptionist and secretary with the Rehabilitation Services at Work Force, WV in Welch. In addition to her parents she was preceded in death by an infant son, James Michael Lane. Those left to cherish her memory are her husband, Thomas R. Dillon of Lexington; a daughter, Jessica Ferguson and husband Michael of Mountain City, TN; a step-son, John Dillon of Mooresville, NC; two brothers, William Rose and wife Veronica of South Bend, IN, and James Rose and wife Judy of Williamson; two sisters, Kitty McPeak of Lovingston, VA, and Mary Gibson and husband Clinton of Batesville, VA; and three grandchildren, Nathan Lane, Shannon Ferguson and Aaron Ferguson all of Mountain City, TN. Funeral service will be conducted Wednesday, March 22, at 11 a.m. in the Douglas Mortuary Chapel in Welch with Rev. Tracy Newman officiating. Burial will follow in Woodlawn Memorial Park in Bluewell. Friends may call at the funeral home Tuesday from 6-8 p.m. Family and friends will serve as pallbearers. The Douglas Mortuary is serving the family.

The family of PATRICIA JEAN LANE-DILLON created this Life Tributes page to make it easy to share your memories.

Send flowers to the LANE-DILLON family.