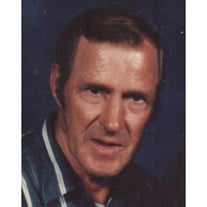 Oliver “Oley” Mullins, 79, of Hemphill went to be with the Lord on Wednesday, October 24, 2018 in Pikeville Medical Center,Pikeville, KY. Born August 18, 1939 in Wolf Pen he was the son of the late Walter and Gladys Virginia Mullins. He was a former coalminer, and a retired custodian with MCNB Bank in Welch. He was a member of God’s House of Mercy and attended the Hemphill Helping HandsHoliness Church in Hemphill. In addition to his parents he was preceded in death by his wife Roxie Mullins on July 7, 2018; daughter Brenda Burks Robinette; and five brothers Carl, Marvin, Clarence, Amos and Cody Mullins. Those left to cherish his memory are two daughters, Michelle Neal and Darrell of Hemphill and Earlene Clemins and Ronnie of Welch; son Eddie Burks and wife Kathryn of Gary; seven brothers, Lee Mullins and Violet of Ironton, OH, Kenneth Mullins and Alice of Michigan, Orville Mullins and Barbara of Lerona, Elvis Mullins and Sandra of Denton, NC, David Mullins and Becky of Gary, Walter Mullins Jr. and Johnny Mullins both of Welch; five sisters, Phyllis Prince of Richmond, VA, Cathy Adams and Eddie of Welch, Geneva Robinette and Robert of North Caroline, Sue Mullins of Welch and Diana Martin and Charlie of Premier; 14 grandchildren, 36 great grandchildren and 12 great great grandchildren; and a host of nieces, nephews and friends. Funeral service will be conducted Wednesday, October 31, at 12 p.m. in the Douglas Mortuary Chapel in Welch with Rev. Jessie Estep and J.B. Robinette officiating. Burial will follow in WoodlawnMemorial Park, Bluewell. Friends may call at the funeral home Tuesday, October 30 from 6-8 p.m. Family and friends will serve as pallbearers. The Douglas Mortuary is serving the Mullins family.

The family of OLIVER "OLEY" MULLINS created this Life Tributes page to make it easy to share your memories.

Send flowers to the MULLINS family.