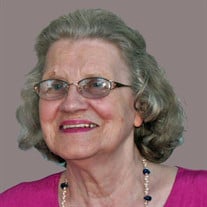 Lucile Jackson Beard, age 92, formerly of Welch, WV, passed away peacefully on Friday, November 20, 2020, at Cumming Health and Rehab in Cumming, Georgia. Lucile was born on August 30, 1928, in the mountains of southwestern Virginia, where her ancestors had lived since the 1600s. She was the third child and eldest daughter born to Toy and Ada Jackson, whose family eventually consisted of eight boys and eight girls. In 1933, the family moved to the small town of English, WV, where her father took a job in the coal mines and built a home and farmstead on several acres of land leased from the coal company. While there were plenty of farm chores to occupy Lucile’s days while growing up in English, she found time to devote to activities in the Methodist Church, learned to play the piano, contributed to community service projects during World War II, and graduated as an honor student and valedictorian from Big Creek High School. In 1949, she married the late William “Bill” J. Beard, Jr., and over 58 years of marriage they made a home in Welch and raised two children who were greatly loved. Anyone who crossed Lucile’s path was touched by her warmth, generosity, gentle humor, and noble spirit. Lucile had a head for business and worked first for a coal company store in Bartley, WV, and later in retail management positions in Welch. She was also gifted with a gardener’s green thumb, was a skilled seamstress, and was a talented musician who loved playing the piano and singing. Lucile grew up singing hymns and gospel tunes in harmony with her sisters, and also accompanied them on the piano at church events around English. As a girl, Lucile once dreamed of a life on the country and western music stage; although that dream was unfulfilled, she never lost her love for music and she continued to find infinite joy in the playing and singing of old-time hymns for the rest of her life. She was also fiercely proud of her West Virginia heritage, and she maintained that sense of pride and loyalty even when the circumstances of her later years took her far from her beloved West Virginia hills. Nothing was more important to Lucile than her family. She was a loving mother to her children and never stopped being the consummate big sister to the younger siblings who so loved and admired her. These strong family bonds, in combination with a deep and abiding faith, blessed Lucile with an indomitable spirit that enabled her to weather good times and bad with her head held high. She was preceded in death by her parents; her husband Bill; her brothers Earl, James, Bill, Bob, Roy, and Frank; and her sisters Bertha, Ava and Linda Lou. She is survived by her son, Dr. John Beard of Alpharetta, GA; her daughter, Beverly Beard of Tallahassee, Florida; her granddaughter and great granddaughter, Lauren Beard Alexander and McKenzie Alexander of Dunwoody, GA; her sisters Rubye, Dorothy, Elva Lynn, and Carole; her brothers David and Jerry; and many nieces, nephews, and cousins. Lucile’s final resting place will be in the Roselawn Memorial Gardens in Princeton, WV. Due to restrictions caused by the current coronavirus pandemic, a graveside funeral service for the immediate family will be conducted at 10:00 a.m. on Wednesday, November 25, 2020. The Douglas Mortuary of Welch, WV is serving the Beard family. Online condolences may be sent to the family at www.douglasmortuary.com

The family of LUCILE JACKSON BEARD created this Life Tributes page to make it easy to share your memories.

Send flowers to the BEARD family.