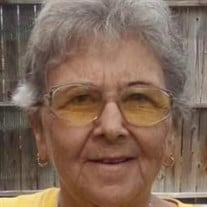 Linda Darlene Rakes, 69, of Coal City, WV, formerly of Welch passed away Thursday, April 7, 2022 in Raleigh General Hospital in Beckley. Born January 10, 1953 in Welch she was the daughter of the late Nick and Daisy Bohin, and the late Thomas Blackburn. She was a homemaker, and attended the Helping Hands Hemphill Holiness Church and the Ark of Safety in Roderfield. She was a special person and will be sadly missed by all who knew and loved her. In addition to her parents; she was preceded in death by her husband Ted Rakes; a son David Blackburn; a daughter Renee Blackburn; and a sister Gloria Castevens. Those left to cherish her memory are two daughters, Dreama Lynn Reed and husband Andy of Coal City with whom she made her home, and Lisa Blackburn and companion Freddie Church of Welch; daughter-in-law Teresa Blackburn of Hemphill; two brothers, Danny Blackburn of Premier and Thomas Blackburn Jr. of Welch; a sister, Carolyn Mullens and husband Jeff of Lexington, NC; a special nephew, Charles “Butch” Rakes of Bishop, VA; five grandchildren, Misty Disney and husband Brandon, Tamara Blackburn and fiancée Charles Williams , Lindsay Reed, Drew Reed and wife Hayleigh, and Austin Galyean; five great grandchildren, Charles “C.J.” Williams, Chase Watkins, Paisley Disney, Gunnar Disney, Gayle Disney and Mason Galyean. Funeral service will be conducted Tuesday, April 12 at 12 Noon in the Douglas Mortuary chapel in Welch with the Reverends Danny Blackburn and J.B. Robinette officiating. Burial will follow in Woodlawn Memorial Park, Bluewell. Friends may call at the funeral home from 10 a.m. until 12 Noon on Tuesday. Family and friends will serve as pallbearers. The Douglas Mortuary of Welch is serving the Rakes family. Online condolences may be made to the family at www.douglasmortuary.com

Linda Darlene Rakes, 69, of Coal City, WV, formerly of Welch passed away Thursday, April 7, 2022 in Raleigh General Hospital in Beckley. Born January 10, 1953 in Welch she was the daughter of the late Nick and Daisy Bohin, and the late Thomas... View Obituary & Service Information

The family of LINDA DARLENE RAKES created this Life Tributes page to make it easy to share your memories.

Send flowers to the RAKES family.