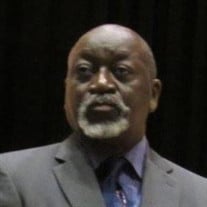 Leroy M. Courts, 69, of War, WV, passed away Tuesday, December 8, 2020 at his residence. Born August 25, 1951 in Welch, WV, he was the son of the late Floyd R. Courts, Sr. and Mattie Pearl McGlothin Courts. He was a graduate of Big Creek High and went on to further his career in music and music education from Bluefield State College where he graduated. He on to receive his Master’s degree in music. He was a Music Director for the McDowell County Board of Education for many years and taught music throughout McDowell County Schools. He was also very willing to share his music talents with anyone that needed him to play for them. He was also a member of the Calvary Baptist Church in War. In addition to his parents Leroy was preceded in death by five sisters, Corrine Porter, Gladys Johnson, Pearline Edwards, Josephine Debose, and Valerie Marie Courts; four brothers, Floyd Courts Jr., Herbert Courts, Clyde Courts and Thomas Courts. Those left to cherish his memories are four sisters, Melinese Courts and Gracie Wallace both of War, Joyce Madrigal and husband Anthony of Tazewell, VA, and Geraldine (Geri) Rosser of Columbus, OH; and his best friend, Michael Lewis of Dayton, OH. He leaves a host of other relatives and friends to cherish his memory. As a result of the current ongoing Covid-19 situation the family regrets that there will be no visitation or funeral services. The family knows that Leroy was well loved and many people would like to attend, but they wish to help keep the public safe, therefore the family will honor Leroy, privately. Follow the wishes of the deceased the body has been cremated. The Douglas Mortuary in Welch is serving the Courts family. Online condolences may be sent to the family at www.douglasmortuary.com

Leroy M. Courts, 69, of War, WV, passed away Tuesday, December 8, 2020 at his residence. Born August 25, 1951 in Welch, WV, he was the son of the late Floyd R. Courts, Sr. and Mattie Pearl McGlothin Courts. He was a graduate of Big... View Obituary & Service Information

The family of LEROY M. COURTS created this Life Tributes page to make it easy to share your memories.

Send flowers to the COURTS family.