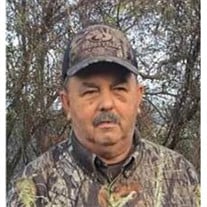 Joel Thomas “Tommy” Ray, 68, of Warriormine, WV, passed away Sunday, September 23, 2018 at Heritage Hall in Tazewell, VA. Born November 8, 1949 in Welch, WV he was the son of the late Estle Junior and Elsie Nadine Hess Ray. He was a member of the Grace Church of God in Pounding Mill, VA. He was a former employee of Consolidated Coal Company for 21 years and a former employee of the Virginia Department of Corrections for 18 years. In addition to his parents he was preceded in death by one brother, Eugene Ray. Those left to cherish his memory are his wife, Drema Ray of the home; three sons, Joseph Ray (Sabrina) of Tazewell, VA, Phillip Ray of Coalwood and girlfriend Jennifer Sandlin of Bluefield and Eric Ray (Rachel) of Warriormine; three sisters, Tammie Whittington (Clarence) of Oak Hill, Bonnie Hass (Roger) of South Carolina, and Mary Fields (Clinton) of Newhall; six grandchildren, Derek Jackson, Amelya, Krista, and J. T. Ray, Elijah and Ethan Fontaine; two great grandchildren, Luke Jackson and Leiland Ray. Funeral services will be conducted Thursday, September 27, 2018 at 12 noon in the Grace Church of God in Pounding Mill, VA, with the Rev. Terry Keen officiating. Burial will follow in the Grandview Memory Gardens in Bluefield, VA, where military graveside rites will be conducted by the V.F.W. Post 1144 of Iaeger, WV. Pallbearers will be Joseph, Phillip, Eric, and J.T. Ray, Jordan Robinson and Walter Johnson. Friends may call at the church one hour prior to the services. The Douglas Mortuary of War is in charge of the arrangements.

The family of JOEL THOMAS "TOMMY" RAY created this Life Tributes page to make it easy to share your memories.

Send flowers to the RAY family.