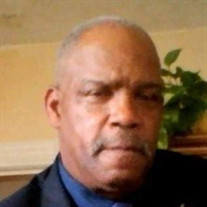 Joe Willie Handy Jr. 69, a current resident of Westfield, NJ, passed away Thursday, December 3, 2020. He was born in Newark, NJ on March 30, 1951 to parents, Joe Willie Handy Sr. and Willa Ann Wright Handy, both deceased. He was the oldest of five siblings. The family resided in Elizabeth, NJ. He attended Public Schools in Elizabeth, NJ, and War, WV. He spent many summers in War, West Virginia visiting with his maternal grandparents, Gertrude Wright Lewis and Peter Lewis (deceased) and paternal Grandparents; Lucy and Nelson Haulsey (deceased). He was confirmed and received his first communion at Christ the King Catholic Church, War, WV. Joe later moved to Scotch Plains, NJ and enjoyed playing softball with the Jerseyland Bombers and also played recreational football there. He enjoyed hunting and fishing and looked forward each year to his Annual Hunting and Fishing trips. He was a skilled mechanic and loved working with his hands building things and beautifying his yard. He was a mechanic at E. J. Korvetts until they closed their doors. He worked many years at the Firestone Autocare Company in both their Bayonne and Springfield, NJ establishments. In the late nineties he began to work for the Town of Westfield, Department of Public Works. There he was employed as a Laborer and at a time served as a Shop Steward for Teamsters Local 469. He was a member of Centennial Lodge #400 of Improved Benevolent Protective Order of Elks of the World (IBPOEW) for over 40 years serving in many offices and currently was the Financial Secretary until his illness prevented him from serving in that capacity. Left to cherish his memory is his wife of over 34 years, Kimberly, his Daughter, Tamara Handy and Son, Joseph (Marie) Handy. Siblings: Ann Handy, Peter Handy, Paula Handy and Debra Handy (Deceased) of War, WV. Mother-in-law, Mary Morgan, Sister-in-Laws: Karin Hopkins (NC) Lisa Majete (VA), Jessica (Justin) Luna (WA) and Grace (Cleodis) Floyd (WA) and Brother-in-Law: David V. Coleman (WA). Nieces: Takisha Moore, Danielle Hopkins, Danielle Harmon, Willa Handy and Sofia Floyd, Nephews: Darrell Hopkins, Jayden & Julian Luna, Goddaughter; Alnesa Coles and a host of other Aunts, Uncles, relatives and friends. Due to the Covid-19 restrictions the service is for immediate family only. Services will be conducted Friday, December 11, 2020 at 11:00 AM from the Douglas Mortuary Chapel in Welch with Father Binny Mulackal, officiating. Services will be live streamed on Facebook and may be viewed by going to the Douglas Mortuary Facebook page. Burial will follow at the Maple Wood Cemetery in Tazewell, VA. Services will be held in accordance with Covid-19 guidelines, masks are to be worn by all attending and social distancing is to be practiced. The Nesbitt Funeral Home of Elizabeth, NJ and the Douglas Mortuary in Welch are assisting the Handy family. Online condolences may be sent to the family at www.douglasmortuary.com

Joe Willie Handy Jr. 69, a current resident of Westfield, NJ, passed away Thursday, December 3, 2020. He was born in Newark, NJ on March 30, 1951 to parents, Joe Willie Handy Sr. and Willa Ann Wright Handy, both deceased. He was the... View Obituary & Service Information

The family of JOE WILLIE HANDY JR. created this Life Tributes page to make it easy to share your memories.

Send flowers to the HANDY family.