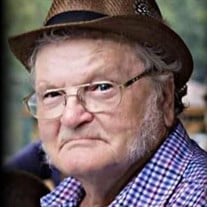 James “Jaydog” Runyon, 83, of Premier, WV, passed away Monday, October 18, 2021 at his residence. Born September 27, 1938 in Panther, WV he as the son of the late Charles Runyon and Hailey Lester Runyon. He was a retired coal miner and truck driver for XMB mining at Eckman. He was of the Pentecostal faith. In addition to his parent; he was preceded in death by three brothers, Edward, Carl and Dennis Runyon; two sisters, Dora Vanover and Belva Patrick; one daughter, Donna Gail Runyon; and one granddaughter, Jennifer Kay Hamby. Those left to cherish his memories are his wife, Rosa Runyon of the home; two sons, Willy Runyon and wife Amy of Gary, Michael Runyon and wife Annie of Hiddenite, NC; six daughters, Dianna Benton and Chuck of Maitland, Kay Walker and Rick Lester of Vale, NC, Rachel Justice and Thomas of Bluefield, WV, Tammy Reed and Junebug of Smith Mountain Lake, VA, Denise Stumbo and Ernie of Superior, Jeannette Green and Boone of Welch; one brother, Cecil Runyon and wife Janna of Hurricane, WV; one sister, Phyllis Morgan and husband Billy of Premier; and 24 grandchildren, 35 great grandchildren and 15 great great grandchildren. Sadly he will be missed, but happily we will remember his quirkiness, his laugh, his smile and the love he had for his family and friends. Funeral services will be conducted Thursday, October 21, 2021 at 11:00 AM from the North Welch Church of God with Reverend Tim Akers, officiating. Friends may call at the church Wednesday evening after 6:00 PM. Funeral Services will be held in accordance with Covid-19 guidelines, masks are to be worn by all attending and social distancing is to be practiced. The Douglas Mortuary in Welch is serving the Runyon family. Online condolences may be sent to the family at www.douglasmortuary.com

The family of JAMES "JAYDOG" RUNYON created this Life Tributes page to make it easy to share your memories.

Send flowers to the RUNYON family.