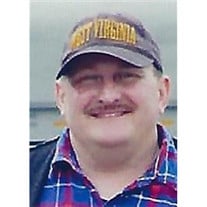 JAMES WILLARD SHELTON JR.James Willard Shelton Jr. ?Knockem?, 58, of War, WV, went home to be with the Lord on Saturday, April 13, 2019 at Wake Forest Baptist Medical Center in Winston-Salem, NC. He was the husband of Emma Muncy Shelton. They shared 31 years together. Born on January 31, 1961 in Welch, he was the son of the late Eula Brooks Shelton and James Willard Shelton Sr. He was also preceded in death by one brother, Robert Shelton. He graduated from Big Creek High School in 1979. He retired from Norfolk and Southern Railroad as a Car Man. He was a member of the Masonic Lodge Berwind 141. He also served in the Army National Guard from1985 to 1998. He was a member of the War City Hall Council and the Hatfield and McCoy Trails Comity. He was also a member of the American Legion. He enjoyed riding trails on his gator, gardening, spending time with his three grandchildren, watching football (diehard fan of Dallas Cowboys and WVU), working to better the community, and reading. He will be remembered for his great intelligence, long conversations, never seeing anyone as a stranger, and his work ethic. He is survived by his spouse Emma Jean Muncy Shelton; two children, James Shelton of Warriormine, WV and Ashley Shelton of Bluefield, WV; three grandchildren, Landon SheltonHatfield of Bluefield, WV, and Salem and Evanora Shelton both of Warriormine; and a brother, Ronald Shelton of War. Funeral service will be conducted Friday, April 19, 2019 at the Independent Church of the Living God in Shop Hollow in War, at 11 AM, with Rev. Benny Mullins and Melvin Muncy officiating. Burial will follow at Grandview Memory Gardens in Bluefield, VA, where Military Graveside Rites will be conducted by V.F.W. Post 1144 of Iaeger and Masonic Graveside Rites will be conducted by the Masonic Lodge 141 of Berwind. Friends may call at the church Thursday after 6 PM. Pallbearers will be Homer Muncy, Anthony Nunley, James Shelton, Robert Beavers, Randy Patterson and Ronnie Morgan. The Douglas Mortuary in Welch is serving the Shelton family.

JAMES WILLARD SHELTON JR.James Willard Shelton Jr. ?Knockem?, 58, of War, WV, went home to be with the Lord on Saturday, April 13, 2019 at Wake Forest Baptist Medical Center in Winston-Salem, NC. He was the husband of Emma Muncy Shelton. They... View Obituary & Service Information

The family of JAMES WILLARD SHELTON created this Life Tributes page to make it easy to share your memories.

Send flowers to the SHELTON family.