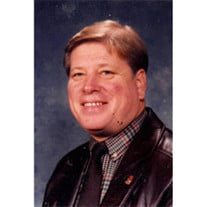 JAMES RUSSELL RICE, JR.James Russell Rice, Jr., age 75 of Welch, departed his earthly life on April 29, 2019 at the Beckley VAMC after suffering from several illnesses for many years.Born October 3, 1943, in Welch, Russ was the son of the late Mattie Bel (Mary) Datson Howlett and James Russell Rice. He attended McDowell County Schools and was graduated from Welch High School in 1964 where he enjoyed playing basketball and especially football for the mighty ?Maroon Waves?.After his high school graduation Russell fulfilled a lifelong dream by serving his country. He enlisted in the U.S. Army and served from 1964-1967 during the Vietnam War. He attended Basic and AIT Training at Fort Knox, KY and served the remainder of his term at Fort Myers, VA where he worked at the Pentagon directly under the Joint Chiefs of Staff in communications.After his discharge, Russ worked for Southern Insurance Agency and then for U.S. Steel for five years after which he used his VA Educational Benefits to attend Bluefield State College where he earned a degree in Education. Russell felt it was a privilege to teach as he began his career at Hemphill Elementary in 1977 followed by twenty-five years at Welch Jr. High and Welch Middle School until his retirement in 2003.He was a member of St. Peter Catholic Church in Welch. He was a member of the Welch Lions? Club, Knights of Columbus, Council 6180 of Welch where he served twice as Grand Knight, Knights of Columbus, Fourth Degree, Assembly 2232, Princeton, WV, American Legion Post 8 of Welch, and 40 & 8 Local 1171 of Welch.Russ was happily married to his high school sweetheart, Elizabeth ?Betty? Chaos Rice for fifty-one years having their anniversary on April 19, during his hospital stay prior to his passing. He thoroughly enjoyed camping and traveling with his family to whom he was completely dedicated. He also loved rooting on his beloved Washington Redskins and watching boxing with his wife on Saturday nights.In addition to his parents, he was preceded in death by his grandparents, Daisy Donce Hodge Rice and Sydney Rice and Nannie Rose Riley Datson Bishop and John C. Bishop; a sister Laura Daisy Osinski; precious grandson with whom he has now been reunited, Kenneth Russell ?Rusty? Eastman; a wonderful son-in-law, Ashley Eastman; a special uncle who was more like a Dad to him, Hubert Rice; his very special aunt ?Aunt Dot? Collins; and many other beloved aunts, uncles, and cousins who all enriched his life as he grew.Those left to cherish his memory in addition to his wife, Betty, are daughters, Anne Marie Prucha (Michael) of Roanoke, VA, Mary Elizabeth Eastman of Shady Spring, and Jami Kathleen Rice of Princeton. Surviving grandchildren are Bethany Veneble (Josh), Matthew Keasler, Abigail Eastmen, James Eastman, Piper Rain Bross, River Prucha, Benjamin Prucha, and great grandchildren Morgan and Logan Wingler.A Mass of Christian burial will be held Friday, May 3 at 11 a.m. at St. Peter Catholic Church with the Reverend Sravan Kumar Reddimasu, celebrant. Burial will follow in Roselawn Memorial Gardens in Princeton where military grave side rites will be conducted by VFW Post 1144, Iaeger.Friends may call at St. Peter Catholic Church on Thursday, May 2 from 6-8 p.m.Serving as pallbearers will be Carmello Miano, Wayne Hicks, Michael Barnett, Steve Chaos, Jim Dalton and Steve Bland. Honorary pallbearers will be Jim Ed Roberson, Harold ?Sandy? Bright, Dick Widener, Steve Bary, Tom Green, Tony Larkin and John Blankenship.The Douglas Mortuary of Welch is serving the family.

JAMES RUSSELL RICE, JR.James Russell Rice, Jr., age 75 of Welch, departed his earthly life on April 29, 2019 at the Beckley VAMC after suffering from several illnesses for many years.Born October 3, 1943, in Welch, Russ was the son of the late... View Obituary & Service Information

The family of JAMES RUSSELL RICE, created this Life Tributes page to make it easy to share your memories.

Send flowers to the RICE, family.