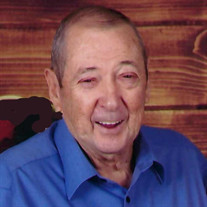 George William “Greek” Vaselaros, 83, of Elbert passed away Tuesday, January 4, 2022 in McDowell Nursing and Rehabilitation Center in Gary. Born August 18, 1938 in Anawalt he was the son of the late George Vaselaros and Elsie Paul Vaselaros. He was a former US Steel employee, and a retired equipment operator with The Department of Highways. He was a member of the Gary #10 Pentecostal Holiness Church. He was an avid Pittsburg Steelers fan and he like to garden and fish. Greek will be sadly missed by all who knew and loved him. In addition to his parents; he was preceded in death by two brothers, Tony and Costo Vaselaros; one sister, Athena Molnar; one nephew, Sammy Vaselaros and one grandson, Charlie Reed. Those left to cherish his memories are his wife Betty Goins Vaselaros of the home; a son, Louis Vaselaros and wife Diane of Welch; three daughters, Athena Spencer and husband Gordon of Shelby, NC, Melissa Reed and companion George of Shelby, NC, and Prudy Sebok of Charleston; one brother Louis Vaselaros on Ponce Inlet, FL; one nephew, Frankie Molnar and wife Prudy of East Lake, OH; 5 grandchildren, Tiffany Lester and husband Greg, April Means and husband James, Ryan Spencer, and Devon and Kaylee Sebok; and 7 great grandchildren, Kylie and Emery Lester, Ryley and Charles Spencer, Kyler, Ben and Elsie Means. In keeping with Greek’s wishes he will be cremated and a service to honor his memory will be held at a later date. The Douglas Mortuary in Welch is serving the family. Online condolences may be sent to the family at www.douglasmortuary.com

George William &#8220;Greek&#8221; Vaselaros, 83, of Elbert passed away Tuesday, January 4, 2022 in McDowell Nursing and Rehabilitation Center in Gary. Born August 18, 1938 in Anawalt he was the son of the late George Vaselaros and... View Obituary & Service Information

The family of GEORGE WILLIAM "GREEK" VASELAROS created this Life Tributes page to make it easy to share your memories.

Send flowers to the VASELAROS family.