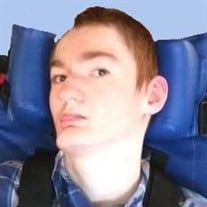 ADAM GENE BLANKENSHIP Adam Gene Blankenship, 24, of War, passed away Thursday, February 6, 2020 at his residence, following a long illness. Born November 14, 1995 in Welch, he was the son of Jessica Leeanna Payne and Adam Gene Blankenship. He was raised by his grandparents, Betty Katherine Bowman and Cecil Bowman of War. He was an Honor Graduate from River View High School. He loved Jesus and was a member of the Lighthouse Community Church in War. In addition to his parents and grandparents he is survived by four brothers, Michael and Isaiah Friend both of Pennington, NC, George Friend of North Carolina and Dewayne Friend of Virginia; three sisters, Christina and Nevaeh Friend both of Pennington, NC and Allison Friend of Virginia; grandmother, Rosalee Adams of Raven, VA and Paw Paw Danny Adams of VA; three aunts, Yvonne Browning of Pineville, Michelle Hartwell and Samantha Lambert both of South Carolina; one uncle, Mark Payne of Tennessee; two great aunts, Beatrix Christian of Eckman and a special great aunt, Amy Collison of Coalwood who thought of him as a brother; a special cousin, Mellissa Cavins of South Carolina; and a cousin, Roy Kennedy of Kentucky. Funeral services will be conducted Tuesday, February 11, 2020 at the Lighthouse Church in War at 1:00 PM with Reverends Ricky Muncy, Delena Muncy and Mary Payne, officiating. Burial will follow in the War Cove Community Cemetery in War Cove. Friends may call at the church Tuesday morning from 11 AM to 1 PM. Pallbearers will be family and friends. The Douglas Mortuary in Welch is assisting the Blankenship family. Online condolences may be made to the family at douglasmortuary.com

The family of ADAM GENE BLANKENSHIP created this Life Tributes page to make it easy to share your memories.

Send flowers to the BLANKENSHIP family.